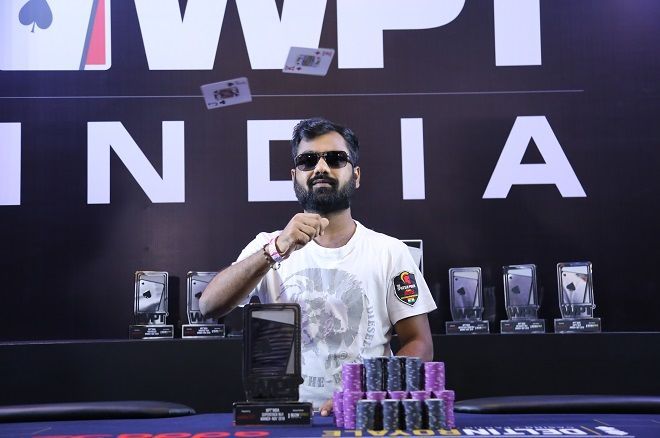 Abhishek Jalan has been crowned the winner of the WPT Goa 2018 Event#2 35K SuperStack NLHE. He continued his brilliant run from Day 1 when he was second in the chip lead with 658,000 chips at the "In The Money" level. He was the chip leader entering the final table with 2,800,000 chips or 43% of the total chips.

The players sat at the final table at 1600 and it took Abhishek Jalan 3 hours and 45 minutes to ship the tournament for a massive ₹1,729,000. Jalan was adamant to clinch the title this year because he came second last year in the same tournament. He was also second in the Ship It tournament in 2017. Jalan commented that this year he was going to make sure he wins the tournament because he was tired of being second place.

The first to depart was Harsh Dempla who shoved his

. The flop gave Naidu a King pair which was enough to break the ladies. Harsh Demple pocketed ₹173,000 for his early final table exit. In 8th position, we had Shashank Jain hit the rail. He had

. Being the short stack, Jain went all-in preflop and Jalan called. Jalan won the hand with Ace pair and sent Jain to the rail for ₹207,000. Next, it was Krishna Kumar turns to bust from the tournament in 7th place for ₹241,940. Jayjit Ray who was down to a 70K stack with 20K/40K blinds went all-in with

. The flop gave Kapoor an Ace pair which proved to be too good for Ray. Ray raked ₹283,900 for his 6th place finish.

Next, it was Srinivas Naidu's turn to exit the tournament in 5th place for ₹342,600. Naidu held

which Naidu raised for 100,000 chips and Rajpal flat called. The turn was a

which Naidu raised again for 100,000 chips and Rajpal called. The river was a

. Rajpal raised all-in with straight against Naidu's Jack pair. In 4th place, Ankit Kapoor was ousted by Jalan for ₹443,700. Kapoor had a stack of 400K at the 30K/60K blind level. He held

. They went all-in preflop and the board ran

which gave Jalan the straight. It was Vinay Rajpal's turn to bow out of the tournament in 3rd place for ₹729,000. He went preflop all-in with

In the final heads up battle, the final hand was anti-climatic at best; but surely Jalan was thrilled. Pavan Jain went all-in with

and King high was enough for Jalan to take down the tournament!