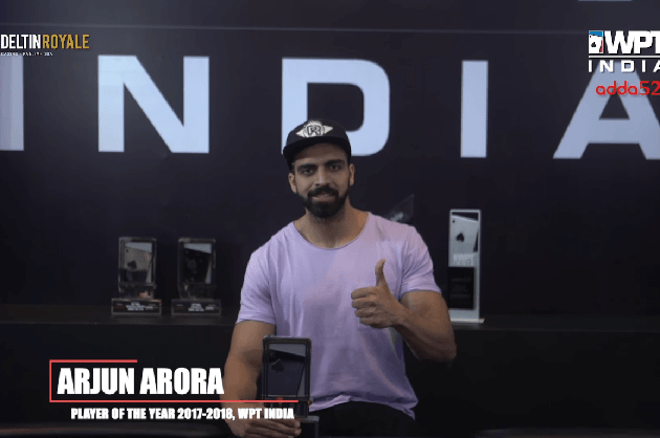 Arjun Arora has been crowned the winner of the first-ever WPT India Player Of The Year title. The WPT India Player Of The Year was adjudged based on the number of points raked by a player in the calendar year 2017-2018. Arora, who was on top of the leaderboard was chosen as the POY for 2017-2018. He received a $5,000 passport credit to participate in any WPT event across the globe.

Though a few players have been more consistent than Arjun with more number of cashes; however, he has finished deep in two main events thus raking the highest number of points. He was 2nd in WPT India 2017 November Main Event for INR 3,947,000 which was shipped by Vikas Mantri and 2nd in DPT 2018 February Main Event for INR 15,28,600 which was won by Dainik Mehta.

These two deep runs were enough to put Arora on the pole position. Here's the video of the felicitation ceremony:

It turns out Arjun Arora is an excellent online player as well. He has been crushing high-stakes online cash tables for a few years now. He also has a very impressive high-value tournament record. He has won the Spartan Sunday SuperStacks twice, shipped the Spartan Elite and the Spartan Devil's Freeze once each, won the PokerBaazi BSS SuperStack and finished 3rd in Spartan's Two Of a Kind recently.

He plans to study the game even harder now and participate in upcoming WPT tournaments in Europe. Arjun has been a longtime friend and I know how passionate he's about poker. He leads a disciplined life and is dedicated towards constantly improving his game. I wish Arjun Arora the best for all his future endeavors and know for a fact that he's going to do wonders on the international poker scene!