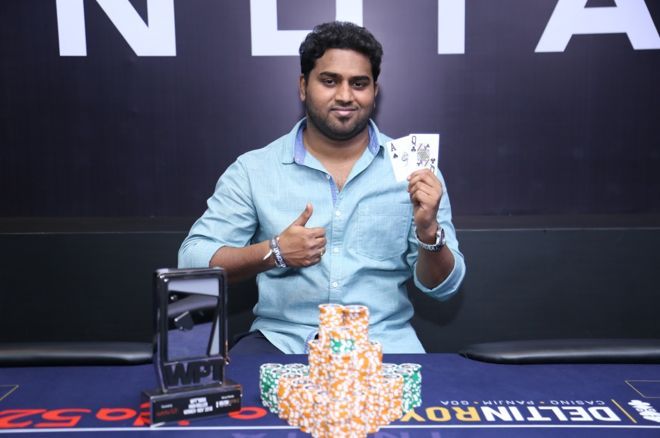 The WPT India 100K High Roller was probably the second most anticipated event after the Main Event in the WPT 2018 series. It was the soft-spoken Kalyan Chakravarthy who turned out to be the biggest crusher of the High Roller event. It's hard to keep a track of the number of players he sent to the rail during the tourney. Not just that; going into the final table, he was the chip leader and he maintained that lead until he clinched the coveted title. For those keeping count, he's solely responsible for busting 7 players on the final table!

As mentioned in the previous post, he bested Minissha Lamba's

There were a lot of murmurs and whispers amongst the crowd that Chakravarthy was going to ship the tournament even before the final table started. Well, the people have spoken and they have been right in this instance.

Following is a quick recap of the hands which led to the final heads up encounter between Kalyan and Minissha:

The bubble bursts and Pranav Bagai and Alok Birewar share the 18th spot! On the first table, Pranav Bagai had pocket Aces

and the opponent held

and Bagai lost pocket Aces to a single carder Flush on the river.

In hand-for-hand, on the other table it was Alok Birewar who was up against Raghav Bansal was dealt

. Birewar went all-in and the board was

. Bansal's King pair was good and the bubble was burst. The players will split the 18th position prize of INR 245,000.

. Agarwal could only make Eight pair and had to exit the tournament for a win of ₹329,000.

. Chakravarthy went all-in and got called by Jaggi. Chakravarthy made a 10 pair on the turn and thus Mayank Jaggi was sent to the rail and will go home richer by ₹329,000 in 11th place.

Next, it was Ashish Munoj to exit in 10th place. He was up against Minissha Lamba's

3-The board gave both of them Ace pair but Minissha won with a higher kicker. Ashish Munoj finished in 10th place with ₹329,000 added to his name.

. The board ran and gave Chakravarthy a 10 pair. Bansal had to settle for 9th place and raked ₹375,520 for his two-day effort in the High Roller event.

which was of no help to Ganesh. Ganesh's run finally ended and his prize stands at ₹424,000 for 8th place.

Mayank Agarwal was the next to hit the rail from the final table at 7th place. He got unlucky when he shoved 8 big blinds with

. The flop was good for Agarwal as it didn't help Kalyan;

. Unfortunately for Agarwal the river was an

. He got unlucky but got paid ₹477,000 for playing excellent poker over the 2-Day event.

Aditya Agarwal was the next to depart in 6th place when his straight lost to Kalyan Chakravarthy's flush on the river. Aditya gets a ₹551,000 payday.

and Kapoor was sent to the rail. His 5th place finish gives him a handsome ₹658,000.

of Chakravarthy. The hand ran

and the set on the flop could not be beaten. Iyer came in 4th place and won a brilliant ₹846000 for his efforts.

In 3rd place, Amit Ajwani and Minissha Lamba were in the hunt of Kalyan Chakravarthy. In his last hand, Ajwani held

and shoved all-in against Chakravarthy's

In the final heads up battle, Minissha Lamba was out stacked 4:1 but that didn't deter her. She fought valiantly for a while but unfortunately, she ran her

and finally, after 2 days of grit and determination, she bowed out of the tournament in 2nd place. She got a well-deserved prize of ₹2,363,000 for competing against the best in the business and beating them!

She also graciously thanked Kunal Patni for being her mentor and said that he needed to train her better to ship the next High Roller event she plays!

Kalyan Chakravarthy is the new WPT India 2018 High Roller Champion and players will need to bring their A-game next year to stop him from defending his title!