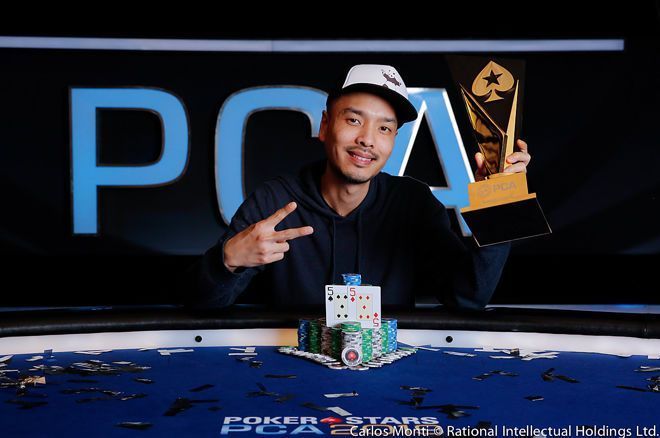 Finally, we have a winner! David "Chino" Rheem has shipped the PokerStars Caribbean Adventure 2019 Main Event for $1,567,100 after battling it out with 865 other contenders. This is his second biggest career cash after his 7th place finish in the WSOP 2008 Main Event for $1,772,650. With yesterday's win, Rheem has moved past the $10 million lifetime live tournament winnings mark with $10,513,973.

The 38-year old pro from the United States is a 3-time World Poker Tour Main Event champion. Just to jog your memory, Rheem was also on the final table of World Series of Poker 2018 Main Event. In total, this is his 5th seven-figure cash. Though he has had enormous success in WSOP and WPT marquee tournaments; this win will be the cherry on the cake as it's his first ever big score outside the United States.

David Rheem has had his share of controversies in the past. Allegedly, he didn't repay debts he owed to other players after winning an event for $1,000,000. However, keeping the controversy aside, Rheem has shown phenomenal skills on the felt and has managed to climb 71st on the All-Time Money List on Hendon Mob.

The first thing he said after becoming the PCA champion was, "It's an honor. I'm very grateful to even have the opportunity to come here and play, and I'm blessed to be able to win it."

The PokerStars Caribbean Adventure main event say two contingents from India as well. Kavin Shah, the winner of the PSPC Platinum Pass wasn't able to make it to Day 2 while Team PokerStars Pro Aditya Agarwal was eliminated on Day 2 before getting into the money.

The final table started with Rheem as the chip leader and he made sure he dominated the table. One by one, he sent all his opponents to the rail. Later on, he said, "Things just went my way. Nature ran its course and obviously, it was fun." The first to hit the rail was Brian Altman, WPT Lucky Hearts Poker Open 2015 Main Event champion. In his last hand, Brian raised

, Rheem three-bet pocket Queens from the blinds, to which Altman four-bet shoved. The queens were good and Brian Altman was forced to bow out of the tournament with a $297,020 payday in 6th place. Then, it was Spain's Vicent Bosca turn to exit the tournament. After treading carefully for almost 50 hands, Bosca raised with

gave him a nut flush draw and a gutshot straight draw. Rheem check-raised all-in with

and Bosca called. The turn hit

and the river was a blank. Thus, Bosca was not able to improve his hand and has to settle for 5th place and a trip to the payout counter for $396,880.

Rheem now started putting pressure on his opponents and the next to depart was Ukraine’s Pavel Veksler. Veksler lost

of Rheem and was sent to the rail for 4th place and a prize money of $503,440. The action was now 3-handed and Rheem held 60% of the total chips. Soon after, Canadian, Scott Wellenbach shoved his

. Wellenbach hit King pair on the

flop and was leading. The

turn gave Rheem a double gutshot but the river was the

. Wellenbach got unlucky when Rheem caught a runner-runner straight and had to settle for 3rd place for $671,240.

Coming into the tournament, Wellenbach had pledged that he would donate all his winnings to charity. He said “Going into the tournament, if you would’ve said, ‘How’s third place?’ I would’ve said 'unbelievably good'. I’m sure in a few days, it’ll sink in and I’ll be happy with the outcome. At the moment though, I feel like I could’ve played better. Certain things didn’t go my way as well. I gotta say I was extremely lucky I was getting certain cards in certain situations. So the fact that things went a little odd today, in no way balances the scale, I was very lucky, very fortunate. The poker gods were smiling, I’m sure.”

and Rheem snap called with

giving Rheem the pot and the championship. Strelitz earned $951,480 for his 2nd place finish and also gave him his career-best score.

Rheem had very nice things to say about his supporters, Noah Boeken and Michael "The Grinder" Mizrachi, among others. "It's a special feeling. It feels good, it means a lot," Rheem told PokerNews. "To be honest, it means a lot to me to do it for the people that were there for me. That's what means a lot."

Check out the video of the final hand below, via a tweet from PokerStars LIVE.

The following are the official standings of the PCA 2019 Main Event: