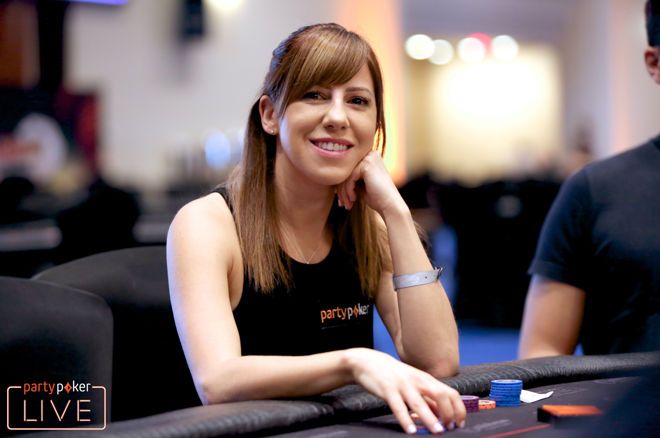 After falling just short of capturing Female GPI Player of the Year honors in 2016, Canadian poker pro Kristen Bicknell came back strong, capturing the title in back-to-back years in 2017 and 2018.

"I'm honored to win female POY again," Bicknell told PokerNews. "I sincerely hope that my presence in tournament poker is able to make a positive impact on the public perception of women in poker. A large part of what motivates me to compete at the highest level is to represent women and prove that men and women are even competitors in the game."

Bicknell was primarily an online player in her first years as a professional, reaching Supernova Elite status and playing live occasionally. One of those live outings resulted in a gold bracelet when she won the 2013 WSOP Ladies Event. Changes to online games prompted Bicknell to transition to playing mostly live in 2015 and about a year after making the switch, she scored her second WSOP bracelet in a $1,500 No-Limit Hold'em Bounty event at the 2016 WSOP. She never looked back.

After beating out Maria Lampropulos for the 2017 Female POY title with the help of 28 live cashes good for $551,906, Bicknell stayed the course the following year, holding her position at the top for most of 2018. She added quite a bit more traveling to her poker schedule which worked out quite well. Bicknell had her first seven-figure live poker year, cashing in 28 more events for a total of $1,095,611.

"I had a lot of deep runs, though definitely a ton of disappointing finishes," Bicknell said of her year. "I feel that I have improved drastically throughout the past year, and am so grateful for all the opportunities and experiences that I had. I got to play numerous high roller events that I haven't played in before, and I really enjoy playing at that level."

"I'm going to work really hard this year, and a big goal or dream of mine is to have my first $1 million dollar win."

She followed that up with 20 more cashes on the year, including another six-figure score of $200K for taking second to her boyfriend, Alex Foxen, in the $5,000 MSPT Venetian DeepStacks event in June.

"Alex had an incredible year," Bicknell said of Foxen, who finished 2018 as the top GPI player in the world. "It seems that the two of us have had a positive impact on each other. We share a true passion for the game, and having a relationship with someone who shares that passion amplifies it and has allowed us both to further immerse ourselves in the game. We're both very competitive people and want to perform our absolute best, and we both naturally support and encourage each other to do so."

As far as what 2019 has in store, Bicknell hopes to finish at the top again, but at least in the top three. Her real goal is to surpass her biggest cash to date, by quite a margin.

"I'm going to work really hard this year, and a big goal or dream of mine is to have my first $1 million dollar win," said Bicknell. "With all the amazing events I will be playing, I think it's very possible. I'm feeling very prepared and excited for the year ahead!"

Bicknell's top ten live scores are listed below, four of which came in 2018.

Below you can find the final standings of the ladies Player of the Year race for 2018 as calculated by the Global Poker Index. Following Bicknell is Maria Lampropulos, the 2016 female POY that also finished second behind Bicknell in 2017. The other ladies making a back-to-back top ten POY finish are Loni Harwood (4th in 2017), Maria Ho (3rd in 2017) and Wendy Freedman, who finished 9th in both 2017 and 2018.

In addition to the POY standings, the Global Poker Index releases a list of the top tournament poker players in the world using a formula that takes into account a player's results over six half-year periods. The following is a look at the top ten ladies GPI rankings as of Jan. 2. For a look at the latest PokerNews overall GPI report, read this article, and to see the entire ladies GPI standings, visit the official GPI website.

While finishing outside of the top ten POY list for 2018, Russian player Daria Feshchenko had a few cashes in November to spring her into the top ten of the current GPI standings. She finished 54th of 1,815 entries at the Caribbean Poker Party and had deep runs in two side events at the WPT Seminole Rock N Roll Poker Open.

You can follow the GPI Ladies races on the official GPI website, and read the Ladies GPI Report which will be released right here at PokerNews on the third Thursday of each month beginning in February. Also feel free to follow the GPI on Twitter and its Facebook page.