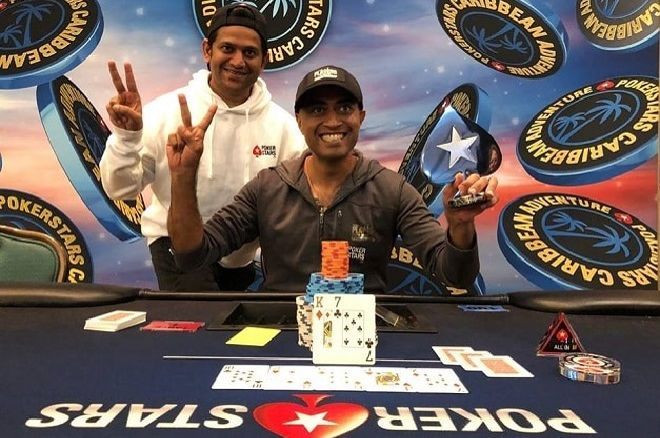 Raman Gujral has created history by becoming the first Indian player to win a PokerStars Caribbean Adventure event. He shipped Event 32: $1,100 NLHE for $76,760 or ~ ₹55 Lakh. This is his biggest cash ever and a proud moment for all Indian poker fans.

8 Indian embarked on the 14,000 Kilometer journey to the palatial Atlantis Resort in The Bahamas to take part in the 2019 edition of the PokerStars Caribbean Adventure. They were Sumit Sapra, Nikhil Segel, Kavin Shah, Raman Gujral, Sharad Rao, Vivek Singh, Saurabh Sindhwani and Aneesh Nair. They won the elusive PokerStars Platinum Pass worth $30,000 which gave them tickets to the biggest live $25,000 tournament ever; the [BPokerStars Players No-Limit Hold’em Championship (PSPC)[/B] with a final guaranteed prize pool of $26,455,500. Sadly, nobody from the Indian contingent was able to cash in the Championship which paid out the top 181 finishers out of the 1,039 entries.

However, all wasn't lost, Raman Gujral participated in Event #32: $1,100 - All Players Are in The Money and proved his mettle by winning the event which had a total guaranteed prize pool of $393K. He also cashed in the $1,100 PCA National event in 62nd place. Event 32 saw a strong player pool of 406 entries from all over the world and 56 re-entries. The tournament came to a close at level 26 where the blinds were 30K/60K. In his final heads up hand against Ukraine's Artem Zverkhovskyy, Gujral was dealt

Previously, Gujral cashes a couple of times in Macau and his previous best performance came in the Asian Series Goa High Roller event where he bagged 2nd place for ~INR 4.5 Lakh in 2012.