Getting Maximum Value From the Nuts 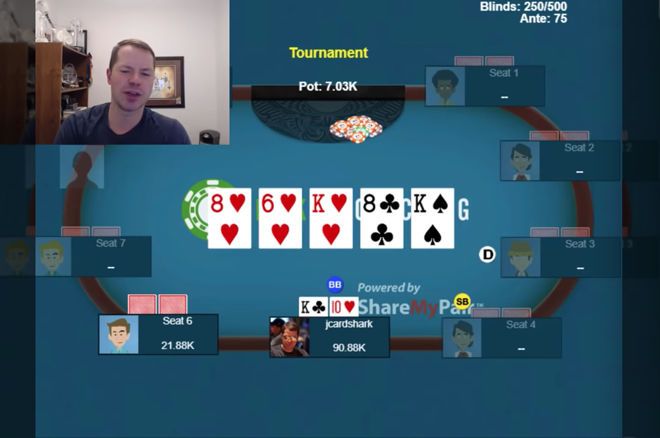 Here is another hand from the $3,500 buy-in tournament from which we have been reviewing hands, one that presents an interesting river decision concerning how best to get maximum value from a strong hand.

The blinds were 250/500 with a 75 ante. Action started with the player sitting under the gun raising just over the minimum to 1,050 from a starting stack of about 25,000. It folded around to me in the big blind where I had a comfortably deep stack of around 94,000 and had been dealt

While that's not such a great starting hand, with such great pot odds I called and the flop came all hearts —

— giving me top pair and a marginal flush draw. I checked, my opponent bet 1,000, and I called.

The turn was the

and the action went the same way — I checked, my opponent bet 1,000 again (just one-fifth pot now, rather than one-third), and I called. I knew my marginal made hand was good enough to continue with, and I was also fine with keeping the pot small.

, giving me a full house, kings full of eights — essentially the nuts (only pocket eights would be better).

Here is where I had to figure out how to get the maximum value from my opponent, with my focus primarily on his having pocket pairs with which he could commit more chips. Take a look at what I decided to do and listen to my analysis of my river decision:

How would you approach this situation on the river? Would you lead with a bet as I did, or check? If leading with a bet, would you bet big or choose a smaller size?

Jonathan Little is a professional poker player and author with over $6,700,000 in live tournament earnings. He writes a weekly educational blog and hosts a podcast at JonathanLittlePoker.com. You can follow him on Twitter @JonathanLittle.