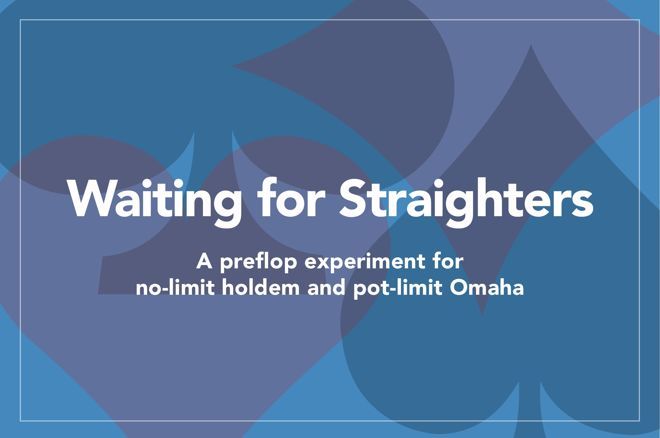 This article is about preflop play at no-limit hold'em and pot-limit Omaha. It's about basing some of your preflop decisions on whether or not you have a straighter.

Part I − DISCOVERY − is the story of how I came to know that the stuff in Part II would do wonders for my bankroll and my sanity forever.

Part II − APPLICATION − begins with an essay on Being Last to Act. Then comes how and why to apply WFS to no-limit hold'em and pot-limit Omaha. Each game has its own section.

Part III is called Using WFS to Tame Tilt, Plug Leaks, and Reduce Fear of Self. If the Waiting for Straighters experiment appeals to you, I don't think it will be on strategic merit alone. It will be because something in Part III makes sense to you and resonates.

When I made friends with Earl, he played backgammon, chess, and gin, but he had no experience with poker. What he did have was a computer and a modem. And this was in 1999, when online poker was only one year old, and all tables were goofy loose all the time.

"A trained monkey could beat these games," I said to Earl.

"How about a trained Earl?" he replied.

We both liked that idea.

"We're going to need something to write on," I said.

Back then, almost everyone played limit hold'em, and in that game, the higher your hole cards, the better. When analyzing preflop strategy, it was a simple matter to draw lines between which hands should or shouldn't be played in a given situation. If it was correct to fold Q-10 under the gun, then it was also correct to fold all hands lower that Q-10, even if connected and suited.

No-limit hold'em isn't like that. At no-limit, it's wrong to even believe in preflop correctness. For one, suitedness and connectedness have more value at no-limit than at limit, as does terrifying your opponents with wide ranges. At limit hold'em, wide opening ranges are no less terrifying, but the psychological advantage of striking fear into the hearts of your opponents is not enough to overcome the statistical disadvantage of having lower cards, because so many hands go to showdown.

I drew two columns and labeled them ALWAYS PLAY and ALWAYS FOLD. Then I filled in the hands that I wanted Earl to always play and always fold.

"Right. That's why patience is vital in this game. But that's not your concern because I am programming you to be a rock."

"What about the in-between hands that you didn't write down?"

"Those are the it depends hands," I said. "Whether you play them or not will depend on two things: your position, and the prior action."

Down the left-hand side of a new piece of paper I wrote these words, nicely spaced: Button, Cutoff, Early Position, Big Blind, and Small Blind.

Across the top of the page, I wrote six column headings: No One In, 1 Limper, 2 or More Limpers, 1 Raiser, 1 Raiser Plus 1 or More Callers, and 2 Raisers.

Next I drew horizontal and vertical lines to form a grid. And I liked what I saw. It was a table. The rows were positions. And the columns were prior actions. Each box of the grid now defined a preflop situation, such as: Two or more players limped and I'm in the big blind.

"Let's start with the busiest position," I said. " The button. If one person limps and you are on the button, you will play all pocket pairs, plus A-K, A-Q, A-J, A-T, K-Q, K-J, and Q-J. Everything else you throw away. Here's what that looks like on the chart."

In the box labeled BUTTON / ONE LIMPER, I wrote:

"Later, I'll add 'R' and 'C' to indicate if you should raise or call. For now, let's just fill in the hands. Notice that each line is a category. First is pocket pairs, then ace-high hands, king-high hands, and so on. The square with the most ink will be BUTTON / NO ONE IN."

In that square I wrote:

"Don't tell me," said Earl. "That means I play all pocket pairs."

I nodded. "Next is ace-high hands."

"You are going to be an internet phenomenon," I said. "Now, about the king-high hands…"

I had to stop and think. Hmm, what's the worst king-high hand Earl should open with on the button?

But not for long:

And then it hit me. I had just drawn the same line in the BUTTON / ONE LIMPER box, when I listed A-K, A-Q, A-J, and A-T as Earl's hands to play, and stopped at A-9. Where did that line come from? I had given it no thought. The A-T / A-9 line had become root code, etched into my DNA by decades of flops. At that moment, I became aware of my belief that situations do exist where it's correct to play A-T and fold A-9, but no situation exists where it's correct to play A-9 and fold A-8.

The Line Between Maybe and Always

Five years later, in 2004, poker exploded, and I became a poker coach for hire. I dusted off Earl's starting-hand chart to use with clients. My idea was to ask them to fill out a blank chart with their starting hands, and that would give me some quick and deep insight as to how they played, before we even talked.

But first, I thought, I should fill out the chart, with my starting hands, to know how my clients would experience this exercise.

So I did. I sat on my couch with a clipboard in my lap. I wrote LIMIT HOLD'EM at the top of the chart, and I pictured a soft game. I gazed into each box, and I imagined the depicted scene… It's been raised and reraised preflop and it's my turn in the small blind. Then I asked myself: What is the worst hand I should ever play in that spot?

Another way I framed the question was: In each of these situations, what hands should I always fold no matter what?

As I filled in the boxes, I was forced to draw lines. To set bars. I had to come up with a reason, however whimsical or sound, for choosing to place each bar where I placed it.

And the straighter line — the gap between three gaps and four — kept showing up in my boxes, as it had years before with Earl. Calling a single raise or not from the big blind. Reraising or not on the button. In situation after situation, the straighters were MAYBE PLAY and the non-straighters were ALWAYS FOLD.

I was lucky and honored to play poker with Bobby Hoff about 20 times. It was during the mid-aughts, when he was flying up to San Francisco from Los Angeles twice a month to play in the big no-limit game at Lucky Chances. I was a regular in that game then.

Twice I was there when Bobby was cashing out and heading back home, and twice he accepted my offer to drive him to the airport. He let me ask him anything. For 20 minutes, I had the mentor of my dreams.

"It's not about how good you play, it's about how bad they play."

Those were Bobby's words of wisdom on the importance of game selection. And, subtly, it was a lesson on the dangers of pride. Maybe he knew I needed that.

Now that you know I'm a Bobby fan, and that I had a pre-existing sensitivity to the line between three-gappers and four-gappers, you can imagine how blown my mind was when Bobby Hoff said these words to me as we turned onto Airport Boulevard at 4 a.m. They came out slowly, to make sure I gleaned the intended lesson.

And there it was again. The str8er line. Given its due, emphatically, by a master.

Three years later, I had written Elements of Poker, people were liking it, and my coaching calendar was full. Half my clients were full-time grinders, some of them at high-stakes. When I coached a top-flight pro, we didn't spend much time talking about betting strategy because that's not what they came to me for. But I did have a short list of strategy topics I'd bring up no matter how good they played, just in case it would up their A-game a smidge. I'd ask about the 3-gap / 4-gap line, and where it fit into their preflop decision matrix.

One day I was working with a quick-minded high-stakes no-limit client (call him Kevin), and I posed my questions…

It was like listening to myself talk. Naturally I agreed with everything. He went on…

I nodded vigorously as he finished and said, "And while we're here, let me ask you a research question. Do you think the 3-gap / 4-gap line should sometimes be the parameter that tips the scales between playing a hand or folding it?"

And Along Came Danglers

My love for the language of poker swelled up yet again when PLO brought the word dangler into our jargon. Here's a rough definition of dangler that I think captures the spirit of the word: a dangler is a hole card that is 4-or-more gaps away from the other cards. We're going to dig deeper into danglers later. My point is that this word arose in the modern wave of PLO analysis, and its existence shows that our collective consciousness is very aware of the 3-gap / 4-gap gap.